The Skellig Islands saw a huge boost in global interest after they were featured in the reboot of Star Wars franchise. 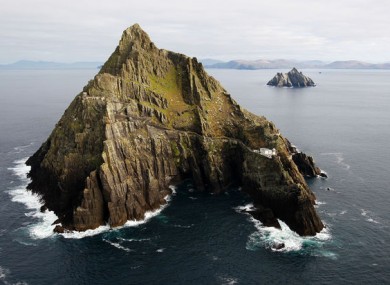 FÁILTE IRELAND HAS today launched a new plan for the Skellig Coast area of Kerry aimed at capitalising on the massive interest generated by 2015’s Star Wars movie.

The Skellig Islands saw a huge boost in global interest after they were featured in the reboot of Star Wars franchise.

Star Wars Episode VII: The Force Awakens features the larger island Skellig Michael, and the beautiful landscape was given global attention throughout the filming of the move.

It will also feature in the upcoming sequel Star Wars Episode VIII: The Last Jedi.

People have since flocked to visit the small island, which is home to a former monastery and also a UNESCO World Heritage Site.

Now, Irish tourism organisation Fáilte Ireland wants to capitalise on that interest and spread it around the entire Skellig Coast area. It today announced its visitor experience plan aimed at increasing “dwell time in the wider region surrounding the iconic attraction”.

“This project is all about widening the current visitor experience from just simply being ‘a trip to Skellig Michael’ to a more immersive engagement with ‘the Skelligs Experience’,” said Orla Carroll, director of strategic development with Fáilte Ireland.

Projects to achieve this goal include:

A group of different concerned organisations are also coming together under the umbrella of the Skellig Coast Tourism Network.

The purpose of this group will be the represent and coordinate the interests of the various local companies working within the tourism sector. Fáilte Ireland has launched a visitor experience plan for the Skellig Coast area, aimed at increasing dwell time in the wider region surrounding the attraction and ensuring that all developments are compelling and motivating to international visitors.

Key to the success of the development of the plan was a programme of consultations and workshops held locally between June and September last year.

The plan will focus on a number of projects based on the following themes:

In addition, a Skellig Coast Tourism Network has been formally launched. The network is an umbrella organisation for the tourism, community, business and development groups that fall within the defined catchment area and will work under the chairmanship of local Cahersiveen man Frank Curran.

Commenting on the initiative, Chief Executive of Kerry County Council Moira Murrell said: “There is no doubt that the Wild Atlantic Way has already been a major boost to coastal areas. This Development Plan will help ensure continued growth in visitor numbers and will also help to extend the season and spread business to our smaller villages.”